Is There A Flu Shot / COVID Link? - Questions For Corbett

Today on Questions For Corbett, Corbett Report member Scott asks about a potential flu vaccine / COVID link. James demonstrates how even the mainstream science shows that such a correlation does exist, although it isn't being trumpeted in the Big Pharma-funded corporate media.

I speak exclusively with the producer and director of the movie about why Amazon "Unpublished" their film.

12bytes says: This is the film about child trafficking/exploitation that Ben Swann talked about in the video above that Amazon banned.

The Transition Integrity Project (TIP) is a shadowy group of government, military and media elites who have concocted a plan to spread mayhem and disinformation following the November 3 presidential elections. The strategy takes advantage of the presumed delay in determining the winner of the upcoming election. (due to the deluge of mail-in votes.) The interim period is expected to intensify partisan warfare creating the perfect environment for disseminating propaganda and inciting street violence. The leaders of TIP believe that a mass mobilization will help them to achieve what Russiagate could not, that is, the removal Donald Trump via an illicit coup conjured up by behind-the-scenes powerbrokers and their Democrat allies.

CNN: Where bad news is bad but good news is also bad!

In India HCQ has been widely available prophylactically since March.

They have one of the worlds lowest mortality rates for COVID-19.

If you want some of that coincidence go to AFLDS.com

The Science of Lockdown, Masks, & Vaccines Is Crumbling - LewRockwell

The primary thrust of public health directives has been to keep the population fearful and therefore compliant and vulnerable to infection and in desperate need of a vaccine. In the absence of a vaccine people need to be exposed and infected to activate sufficient antibodies to produce long-term immunity. That is what is called herd immunity.

So far, tactics we've seen in the last 3 years include abusing speech-chilling "conspiracy" laws (Rise Above Movement), launching absurd manhunts for people who put up a sticker (a case in Virginia), giving a man 3.5 years for identifying "antifa" rioters online (Daniel McMahon), even wasting massive amounts of resources to try and turn an internet flame war on Telegram into a federal spectacle (Christopher Cantwell).

In this video John Bush breaks down the false belief that government is a necessary evil and without it there would be chaos.

From Blue Shirts to Brown – OffGuardian

"On at least 3 or 4 occasions in the past week we've had to smash the windows of people in cars and pull them out of there so they could provide their details – because they weren't telling us where they were going; they weren't adhering to the chief health officer's guidelines, they weren't providing their name and their address." -- Shane Patton, Victorian Chief Police Officer 04/08/2020

Letter to a Left-Wing Friend - LewRockwell 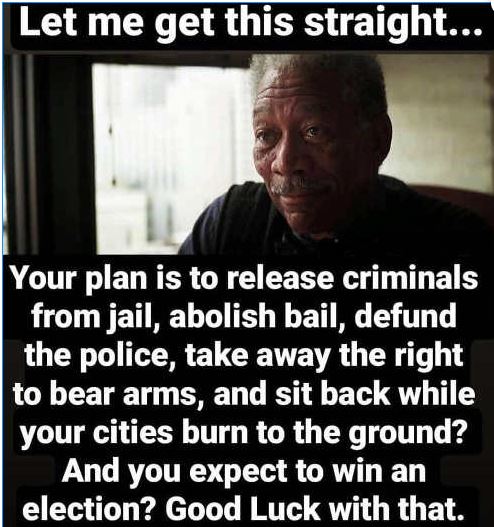 The Planet's Not Angry, But the Pelosi/Newsom/Harris Climate Howlers Are Truly Dangerous - LewRockwell

If you want a sneak peek of our dystopic future under the impending Kamala Harris/Progressive Left Regency look no further than the recent utterances of California Governor Gavin Nukesom.

The latter is the poster boy for the camarilla of left-wing ideologues fixing to take power if the electorate sees fit to put Sleepy Joe in the Oval Office for an occasional oxygenated and propped-up fireside chat from his teleprompter.

One of the obvious outcomes of the government and media's 'pandemic' narrative is advancing the idea that normal testing for efficacy and safety must be dispensed with due to the urgency of the situation. Their narrative is based on the belief that the 'pandemic' is so severe that the public simply 'cannot wait' to properly test and develop this new COVID-19 vaccine, and that it provides the only path towards herd immunity – and a return to 'normal' life as we once knew it. This global vaccine initiative is being heavily promoted by Bill Gates, the transnational pharmaceutical industry and the corporate media.

However, this tenuous narrative is based on an entirely fabricated premise – driven by the a supposed need for endless mass-testing, resulting in the predictable "Case-demic" which has followed.