Here at the beginning of March, 2022, official government health statistics in Europe and the United States are reporting that 65,615 people have now died following COVID-19 injections.

These are “passive” reporting systems, so the true lives lost is much higher. One study estimates that the unreported factor for COVID-19 vaccine injuries and deaths is 41X, which would put these totals at closer to 2.8 MILLION deaths, and that is just in the U.S. and certain countries in Europe. 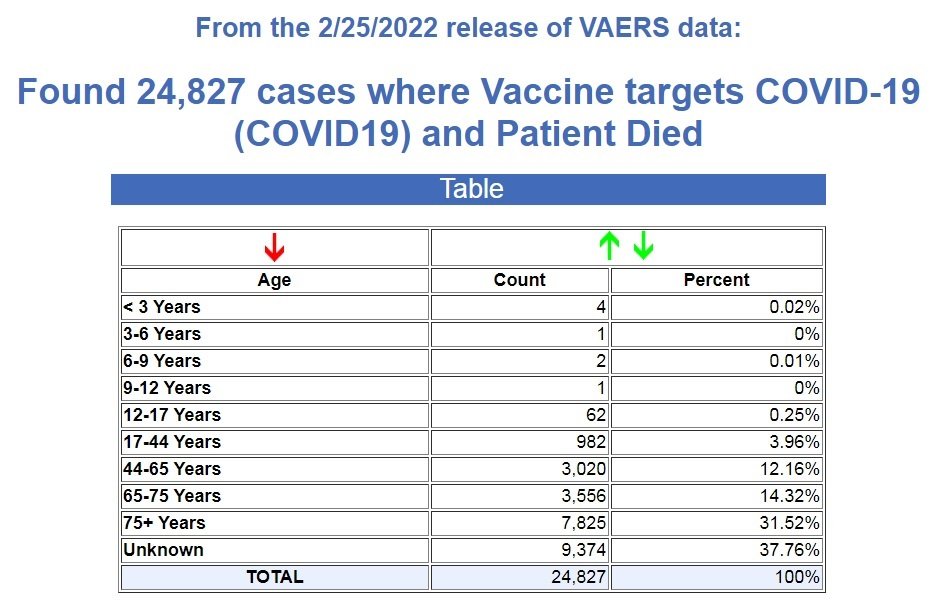 That is 2.74 times more deaths than total deaths (9,051) recorded following all vaccines for the previous 30+ years. (Source.) 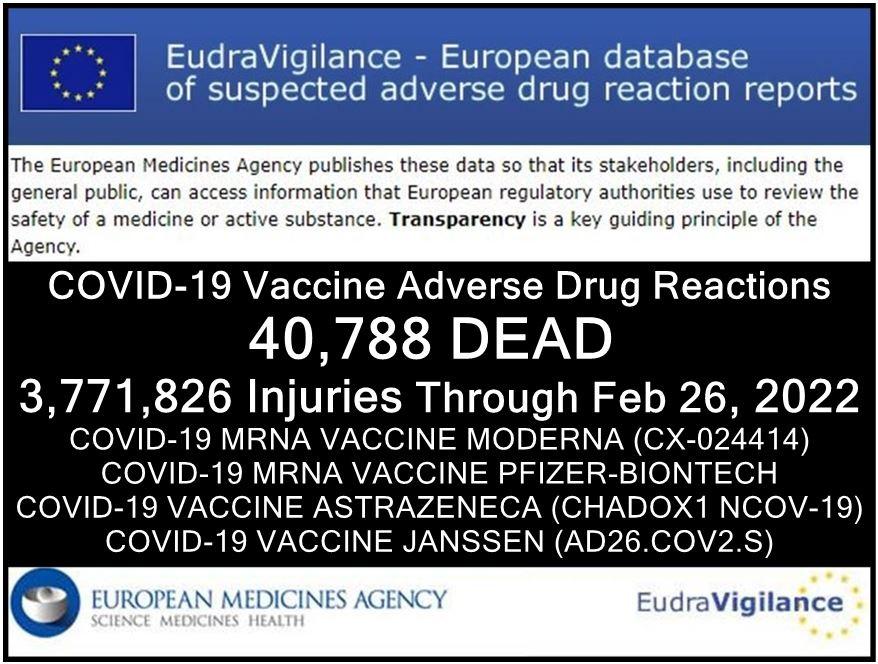 When Pfizer applied for FDA approval, they were aware of almost 158,000 adverse events. This really does not paint them in a favorable light. And now, it’s been officially reported that Pfizer’s COVID vaccine has 1,291 side effects according to released documents.

In January, a judge ordered the FDA to provide clinical data on the COVID vaccinations, which resulted in the disclosure of 55,000 pages of documentation.

The FDA had planned to keep the data hidden for 75 years until releasing it in 2096 because, well, the FDA is essentially a criminal conspiracy. The COVID vaccinations never should have been licensed in the first place.

This was clear from the start, when the Trump administration’s ill-fated “Operation War Speed” bypassed animal tests. It’s now definitely true. We’ve got the clinical evidence, and it’s horrifying.

The clinical data for Pfizer’s vaccine is hidden in one appendix (read below), which contains 1,291 unfavorable side effects in alphabetical order.

Richard Sakwa is Professor Of Russian And European Politics at the University of Kent.

He has written books about Russian and eastern European communist and post-communist politics. Richard was a participant of Valdai Discussion Club, as well as an Associate Fellow of the Russia And Eurasia Programme at the Royal Institute Of International Affairs. He is also a member of the advisory boards of the Institute Of Law And Public Policy in Moscow.

Richard’s conversation with me covers a lot of ground, including

After many denials over the years through the Freedom of Information Act (FOIA) and after a Mandatory Declassification Review case was rejected (for an unclear reason) to get this material, The Black Vault filed a FOIA request to get the "photographs and videos of the wreckage of United Flight 93, taken on or around September 11, 2001" released to the public.

That case was filed in December of 2021, and on February 14, 2022, the FBI responded by denying all of the records as being "exempt from disclosure."

Waves of Light-Episode 4: Veda Austin on The Consciousness of Water, The Power of Intention

Extraordinary and educational conversation with New Zealand water researcher and writer Veda Austin on her work in line of Masaru Emoto's work and Gerald Pollack's in uncovering the innate symmetry and structure of water, its vulnerability to contamination, radiation, and processing, its receptivity to human emotion and intention, its seeming consciousness, laid bare in a series of communications she and others she reports have had with water, and the great power for change it offers in our world today.

Not merely does the freezing of water imbued with specific intention or laid over an image, a word, a number express in crystalline formation a pictorial representation of the sign used, the repeated emergence of specific shapes and forms in response to certain words like climb, creation, Om, point to an innate lexicon, a language that water uses in its expression and communication with us. This language composed of symbols which Veda calls hydroglyphs is now being probed and recorded by both herself and others she is in contact with worldwide, leading to the production of a work-in-process to document the language of water.

Tracing the history of her influences, from Masaru Emoto's work in water responding with beauty to affirmative language and thought to Laurent Costa's microscope photographs of water mirroring the joy in human faces, Veda also mentions the work of radionics engineer Thomas Hieronymus in observing the imprints of fish organs on ice in a stall, and her own experiments with communication of thought and feeling in water.

In a sense she says she considers her early work—the extraordinary examples of which can be seen on her website (some included in the video)--primitive, while moving now to a deeper exploration of what water wishes to express, and how the hydroglyphs appearing in water are now becoming more transparent as their repeated emergence clarifies their collective meaning.

Veda also discusses her methodology for collecting, exposing water to images, word, feelings or intentions and then taking the image from the first-freezing-layer which appears, assuring us we too can experiment in these water for ourselves, while also recommending we begin by seeing what water wishes to say to us first, by collecting different kinds of water spring water, tap water etc and seeing what we can see.