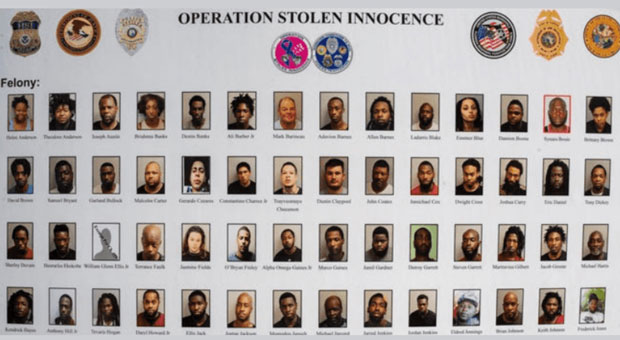 More than 100 people were charged with felonies, including human trafficking, lewd and lascivious battery on a child under 16, and production and possession of child pornography.

Sheriffs in 5 Southern California counties with a total population of 17.25 million people – equivalent to the fifth most populous state – are defying that state's governor. They will not arrest people for violating the statewide curfew that Governor Gavin Newsom has imposed starting today, apparently on the belief that the virus wakes up, and goes out at 10 PM.

Newsom has lost all credibility for restricting activity in the name of suppressing the spread of Covid. He was caught and exposed flouting his own ridiculous strictures on eating in restaurants (put your mask back on between bites of food). Public exposure of his mask-less attendance at a party full of lobbyists at one of the fanciest restaurants in the world with no social distancing was bad enough. But his subsequent lying, smirking non-apology apology may well be the death knell for his political career.

An elderly woman chose to end her life through doctor-assisted suicide, rather than endure another looming lockdown at her long-term care facility last month in Canada.

Man Who Raped, Buried Teen Girl Alive Says 'I Invite Everyone to Islam' as Last Words Before Execution

In a release posted on its website, the Department of Justice summarized the reason Hall was executed, noting that in September 1994, after a failed drug deal "Hall and his accomplices drove to the Arlington, Texas, home of a man they believed had stolen their money."

"The man's 16-year-old sister, Lisa Rene, refused to let them inside. Although Rene — an honor roll student with dreams of becoming a doctor — had no role in the drug transaction, Hall and his accomplices broke into the apartment and kidnapped her at gunpoint," the release said.

After the girl was repeatedly raped "Hall and his accomplices took her to a park where Hall and another accomplice had dug a grave that afternoon, but they could not find the grave site in the dark. The next morning, they returned to the park with Rene," the release said,

"At the grave site, Hall placed a sheet over Rene's head and hit her in the head with a shovel. Rene screamed and tried to run away, but the men tackled her and took turns beating her with the shovel. After soaking her with gasoline, they dragged her into the grave and buried her alive," the release said.

The Woke Wars of 2020 Reach Peak Insanity: University of Wisconsin to Remove Chamberlin Rock Because of its "Racist Past", by Paul Kersey - The Unz Review

Yes to strip clubs opening, but no to churches … because of COVID-19. This was the result after San Diego Superior Court Judge Joel Wohlfeil issued a stay against the implementation of Governor Gavin Newsom's order that prevents establishments from "being allowed to provide live adult entertainment." Gavin's order is his latest draconian lockdown measure as coronavirus infections have spiked in the state in recent weeks. Judge Wohlfeil's rationale for his ruling was that strip clubs constituted "constitutionally protected speech" and that Newsom's order would harm the business. So what about the religious liberty guaranteed in the First Amendment?

Jess (@jessiprincey): "Dominion Voting Systems (DVS) and the Author who created Scorecard in the Serbian team for DVS..." | nitter

Dominion Voting Systems (DVS) and the Author who created Scorecard in the Serbian team for DVS.

We all know that this election was stolen. Over the last couple days people have been talking a lot about DVS, recently I was researching companies to see how many IT people they employ in US vs overseas, and I found a feature which lets me search LinkedIn by region, so I thought I would apply the same to DVS and see if we can contact any developers in Serbia to get them to flip on DVS.

Convicted spy Jonathan Pollard, a former US Navy analyst who sold government secrets to Israel, has completed parole and is now free to return to the Jewish state, according to reports.

Pollard, 66, was jailed for passing thousands of confidential documents to an Israeli official in exchange for lucrative payoffs until his arrest in 1985 — a scandal that caused a rift between the U.S. and Israel that spanned decades.

A former Chicago State University professor faces federal charges for allegedly embezzling over $650,000 from a national organization geared toward providing opportunities to minority students. The group, Student National Pharmaceutical Association, even named her as one of their top 25 professors back in 2015.

One of the easier targets for social demolition by western authoritarians and bureaucracies has been schools. Aided and abetted by a hysterical mainstream media permanently geared towards maintaining a constant level of public fear, politicians have been able to deceive worried parents and teachers who may genuinely believe that COVID19 poses some sort of overall health threat to children (which it does not), as well as the widely-held canard that asymptomatic children are somehow 'spreading the virus' to other adults, the old and vulnerable. Numerous scientific studies have clearly shown how this is not the case. But by sustaining these widely held myths, governments have been able to successfully level primary and secondary education across the western hemisphere and retard the educational and social development of hundreds of millions of young people in the process.

"There is utterly unfounded public hysteria driven by the media and politicians. It's outrageous! This is the greatest hoax ever perpetrated on an unsuspecting public."

A California school district is being accused of censorship after it banned the teaching of five classic American novels, claiming they espoused "racism."

In a shocking irony, one of the banned books was written by Mildred D. Taylor, a black woman who's the great-granddaughter of a former slave.

In September, the Burbank Unified School District temporarily barred the following novels from inclusion in its curriculum, according to Newsweek:

• "To Kill a Mockingbird" by Harper Lee
• "The Adventures of Huckleberry Finn" by Mark Twain
• "Of Mice and Men" by John Steinbeck
• "The Cay" by Theodore Taylor
• "Roll of Thunder, Hear My Cry" by Mildred D. Taylor

Ingraham on Biden's Great Reset: 'Get Ready for the Fight of Your Life' - 21st Century Wire

It's perhaps no coincidence that Joe Biden's campaign slogan, "Build Back Better" is also being used by globalists like Justin Trudeau, Davos ally Boris Johnson, and of course by WHO Director-General, Dr Tedros Adhanom Ghebreyesus (image above). What this really indicates is that Biden is and always was, a globalist puppet, marching to the orders of the World Economic Forum and the billionaire oligarch class led by Bill Gates and others. All of these leader are coordinating a radical internationalized collectivist and neo-feudal restructuring plan called 'The Great Reset' behinds the scenes, away from public debate. It's an opaque social engineering agenda, forged by unelected technocrats in Davos, and one which citizens in their respective countries never had a chance to vote on.